Bridgestone Celebrates 88 Years, 3 Plus One Promo Launched in the Philippines

The Tyre Press, the world’s leading publication for the wheel and tire industry, recently published a report about the top tire manufacturers in the world. It named Bridgestone of Japan as the No. 1 tire brand in the world, in terms of global sales, production and total earnings. Michelin (France) was 2nd, Goodyear (USA) was 3rd, Continental (Germany) was 4th and Pirelli (Italy) was 5th 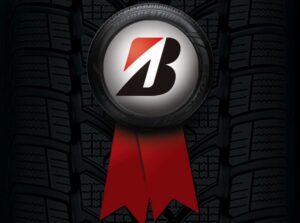 Bridgestone’s No. 1 ranking is the result of years of experience, loads of engineering, and careful planned evolution. The very first Bridgestone tire ever produced was a motorcycle tire made in April 9, 1930 by the Tabi Socks Tire Division of Japan. On March 1, 1931, founder Shōjirō Ishibashi established the Bridgestone Tire Co., Ltd. in the city of Kurume, Fukuoka Prefecture. The company was named using the reverse amalgamation of Ishibashi: ishi – stone and bashi – bridge. 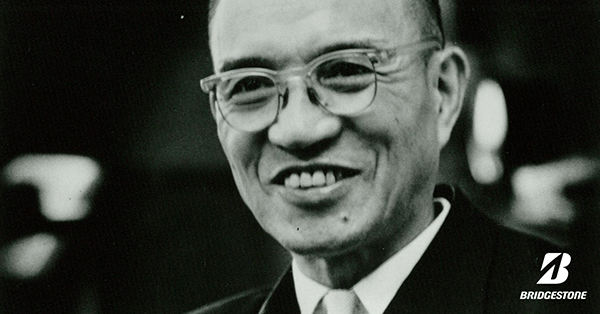 Bridgestone did not depend on the then-dominant European and North American technology but instead relied on manufacturing tires using Japanese technology. It initially experienced technological, production, and sales problems at the start but eventually, quality and manufacturing processes were improved that led the tire brand’s rapid expansion in domestic and overseas markets. After the hostilities of World War II ended in 1945, Bridgestone immediately resumed its operations in their Kurume and Yokohama factories despite the extensive damage to their Tokyo head office. 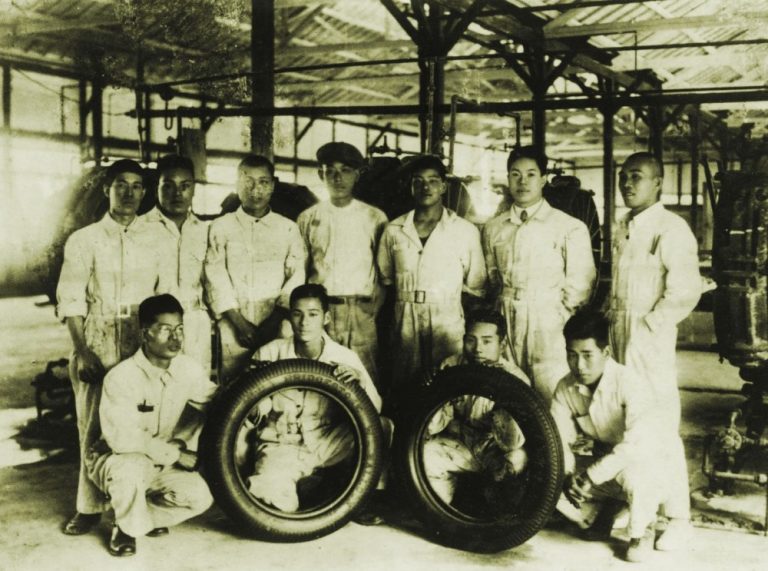 The Bridgestone factory during its formative years.

The increased demand for their tires prompted the company to undergo a modernization program from 1951-1955 to improve their manufacturing facilities. Their efforts were rewarded in 1953 when sales surpassed 10 Billion Yen and made Bridgestone the No.1 tire manufacturer in Japan. They opened the Tokyo factory in 1960 to cope with the expanding Japanese automotive industry. After adopting the Deming Plan to improve overall quality control activities, the company started opening overseas plants and sales offices in Asia, North America and Europe.

Exhibit of the Prince sedan at the Bridgestone headquarters in March 1952.

Bridgestone was the first Japanese tire company with rayon cord tires in 1951 and the first with nylon tires in 1959. They introduced their first radial tire, the Bridgestone RD10, in 1967 and won the prestigious Deming Prize in 1968 for their quality control activities. Despite the economic slowdown caused by OPEC oil embargo in 1973, Bridgestone continued to establish proprietary radial tire technology in their new manufacturing facilities. They introduced the Super Filler Radial in 1978 and the high-performance Potenza in 1979. They also went into diversified products like the Bridgestone Metalpha steel cord plant in Tennessee, USA, which now dominates the supply of steel cords to majority of the world’s tire manufacturers. 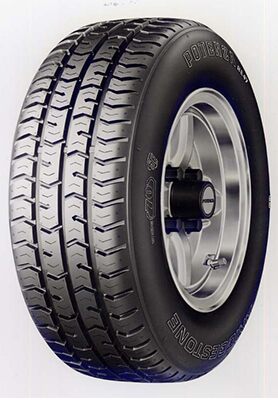 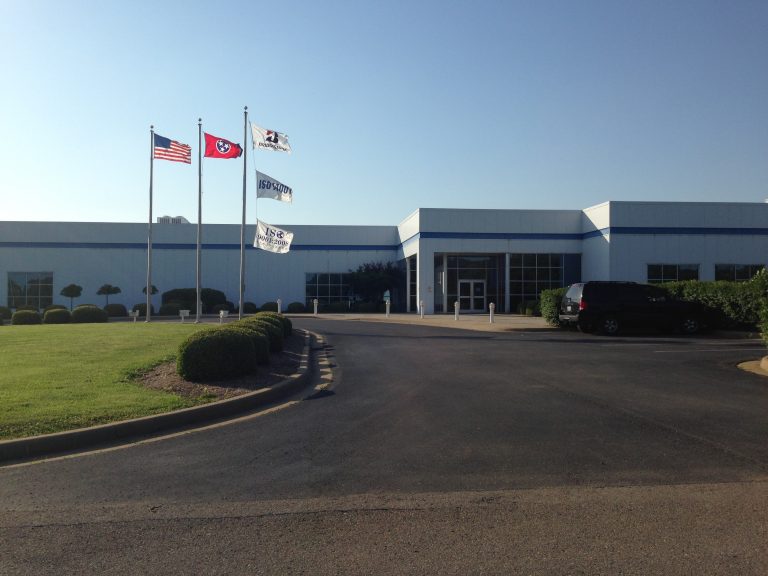 The company likewise went into motorsports to improve their tires’ performance, safety, and durability features. Since 1976, Bridgestone supplied tires to Formula One, Formula 2, Formula 3, Formula Ford, Formula Opel-Lotus, Le Mans, and professional karting. Bridgestone tires helped Mika Häkkinen and McLaren-Mercedes win the Formula One Driver’s Championship and Constructor’s Championship title in 1998 and Michael Schumacher and Scuderia Ferrari win the titles from 2001 to 2004. With the purchase of the Firestone Tire and Rubber Company in 1988, Bridgestone got into Champ Car, IndyCar, and Indy Lights in 2000. All their racing experiences went into the Bridgestone tires that you can buy off the shelf. 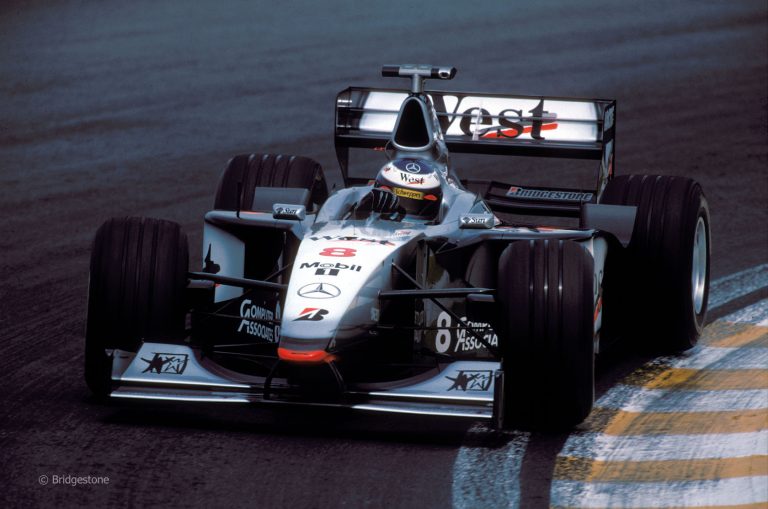 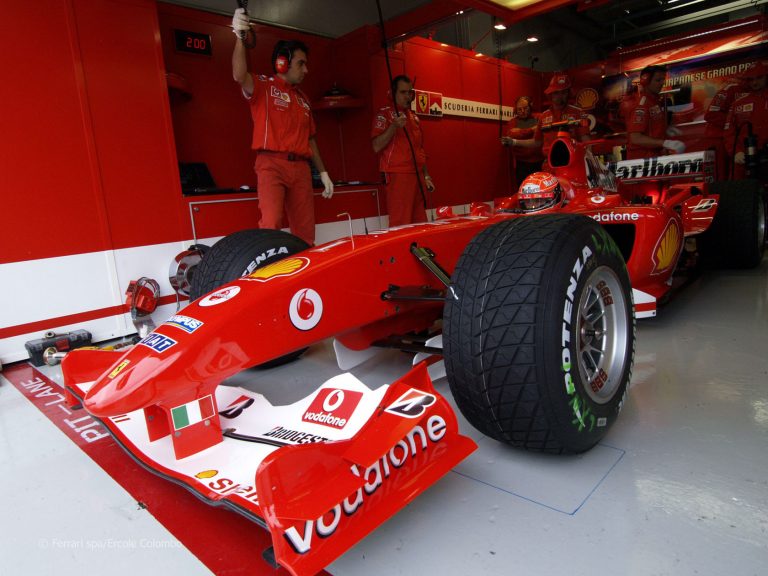 Changing with the Times

From manufacturing their first tire in 1930, to making golf balls in 1935, aircraft tires in 1936, bicycles in 1949, motorcycles in 1952, to making racing tires for Formula One, Bridgestone has evolved continuously with the times. Today, the Bridgestone Corporation has 181 production facilities in 24 countries with 47 tire manufacturing facilities, 29 tire-related plants, 19 raw material plants, 89 diversified product plants, 4 technical centers, and 11 proving grounds around the world. Bridgestone has also announced plans to open production facilities in Cameroon, Africa (2020), Myanmar (2012), South Korea (2022), Kenya (2023), Estonia (2024), Puerto Rico (2025), Belarus (2026) and Bolivia (2027) to meet the rising tire demands in Europe, North and South America, Asia and Oceania, the Middle East and Africa. 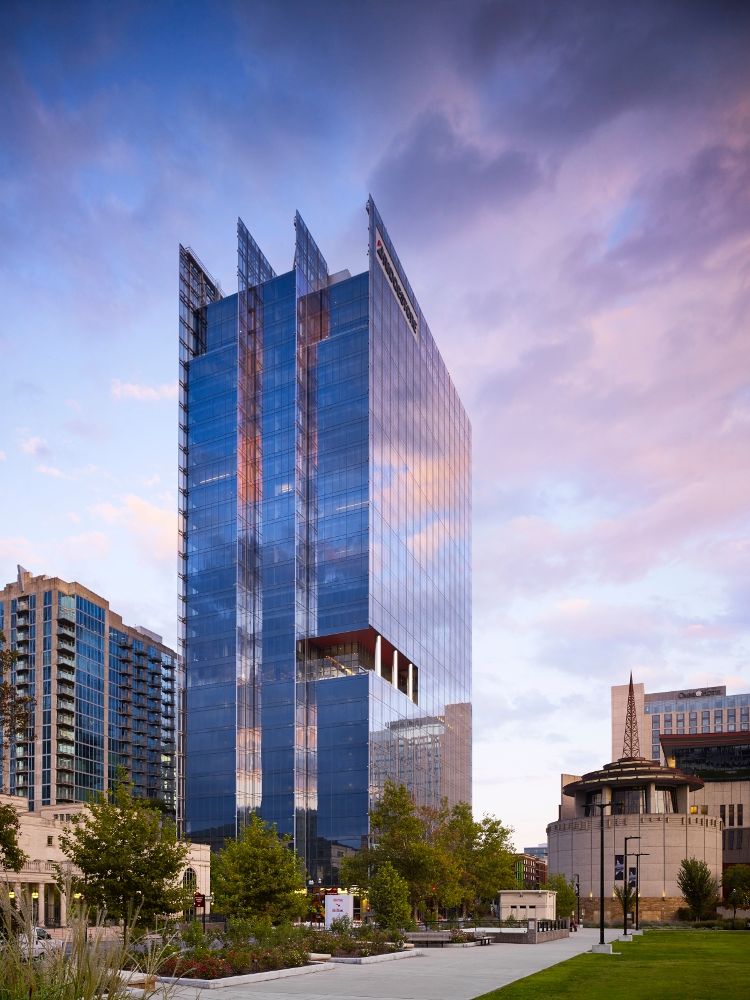 The Bridgestone Tower in Nashville is the company’s American headquarters.

In the Philippines, Bridgestone tires are exclusively distributed by Philippine Allied Enterprises Corporation (PAEC) since 1953. To celebrate 88 years of Bridgestone tire technology and success, the company offers a unique “Bridgestone 3 Plus One” promo, where buyers will get a free tire for a purchase of three tires. It’s like getting four tires and you only need to pay for three. The promo is available for all Bridgestone models including the Dueler A/T, Ecopia, Turanza and Potenza models, and will last from May 1, 2019 to August 30, 2019. This may be your chance to improve the performance of your vehicles and experience for yourself why Bridgestone is the No. 1 tire brand in the world. 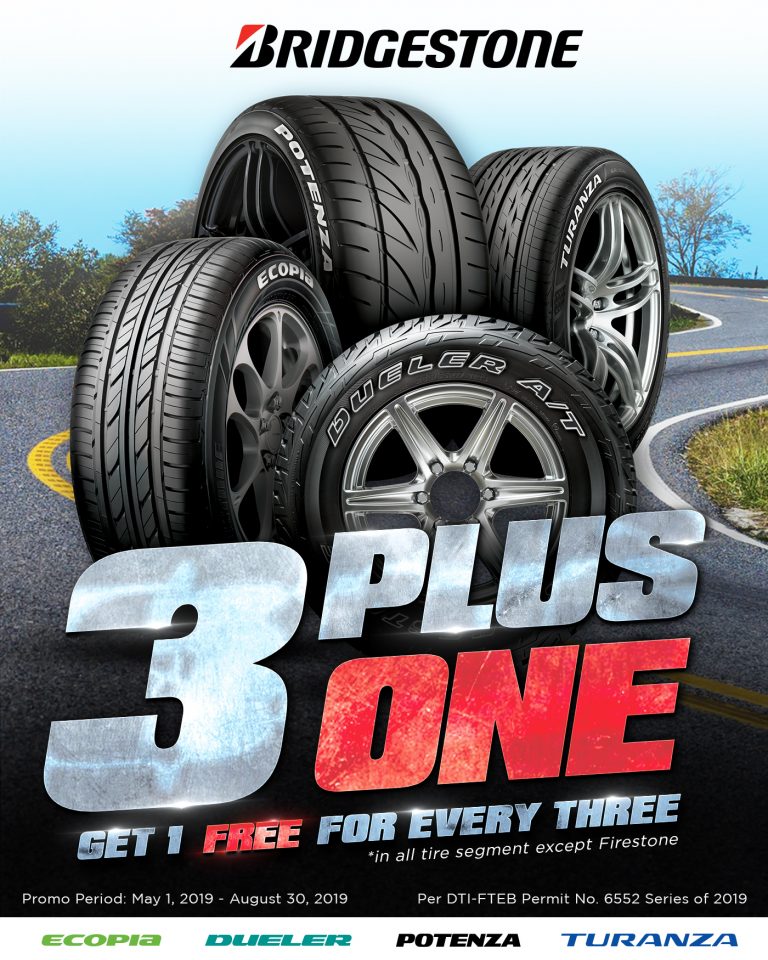 as seen from Powerwheels